in the path for a sustainable lifestyle

Recently I attended a conference in Paris aimed at answering this question, which, by the way, I repeatedly ask myself. I used to love eating seafood. Actually, I still like it, but now, before ordering a sushi, I think twice, three, four times… and most often I give up.

The conclusion of the event, organized by the Institut Océanographique, in partnership with WWF, MSC (Marine Stewardship Council) and ASC (Aquaculture Stewardship Council), was quite aligned with my personal reasoning. [Spoiler alert] Yes, we can still eat seafood, as it’s delicious and highly nutritious. But we need to significantly reduce our intake, as we’re so many eating so much. And before eating, we should keep some stuff in mind.

Oceans have been facing two major problems: overexploitation and pollution (guess who causes them). Over the last century, technology enabled a dramatic increase on our capacity to fish. More and more increasingly powerful boats have been fishing at industrial scale around the world.

It didn’t take long until the big blue started giving signs of not being big enough in the face of human’s voracity. After decades of continuous growth, the production of world’s marine fisheries peaked in 1996 at 86.4 million tones and has declined since then, according to FAO (Food and Agriculture Organization of the United Nations).

Today almost one third of the world commercial fish stocks are overfished, which means they’re being fished at unsustainable rates, so both stocks and yields are decreasing. Other 58% are fully-fished, meaning that increases in fishing activities above current levels would lead to overfishing, says the FAO report “The State of World Fisheries and Aquaculture 2016”.

Our insatiable appetite has reduced several fishes’ populations to a point where the survival of the species themselves is at risk. The cod case in Canada is emblematic. In 1992, the Atlantic Cod stocks in Newfoundland, once considered the world’s most productive fishing grounds, collapsed after years of overfishing and governmental mismanagement.

Canada’s government then declared a moratorium on one of the most sought-after species, dropping the curtain after almost 500 years of fishing activity and letting 40,000 people without jobs. Two decades later, we see signs that the local ecosystem is recovering. In 2015, Canadian authorities released a report suggesting that cod were finally making a comeback. But commercial fishing there is still out of scope.

The next imminent crisis is called Bluefin tuna. It’s the largest tuna and one of the biggest fishes swimming around. It was worth peanuts and used as cat food in the beginning of the 20th century. But once humans started to appreciate its fat and red meat, Bluefin Tuna became a valued delicacy in sushi markets and made its way into lists of species threatened with extinction. 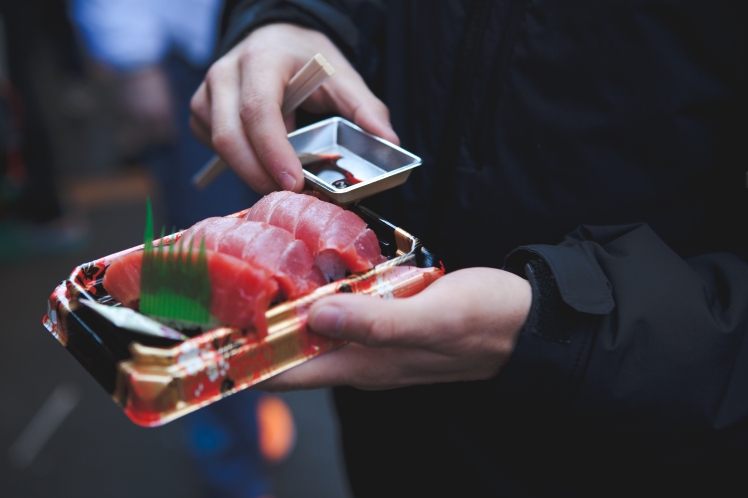 Overfishing and illegal fishing became business as usual. The population of the Pacific Bluefin Tuna, for instance, has dropped by more than 90%, according to Pew Charitable Trusts. One country alone responds for about 80% of Bluefin Tuna global consumption. Guess who? In 2013, a single Bluefin Tuna of 222 kg fetched a record of $ 1.7 million in the traditional auction that takes place at Tokyo’s Tsukiji market. Its fate? To be served raw, on top of some gluey rice, in a Japanese restaurant chain.

But driving the species to the brink of extinction is not the only problem caused by tuna-fishing, because the net that catches them also catches many other unwanted animals (aka bycatch). This “collateral damage” kills tons of dolphins, whales, rays, sharks, sea birds among other animals. Needless to mention tuna’s ecological importance to marine food chains, as both prey (juveniles) and top predators.

Overfishing not only affects the balance of marine life but also threatens the livelihoods of about 800 million people living in coastal communities that rely on fish as a way of life and as primary source of protein. The negative impacts hit harder developing countries, where locals relying on artisanal methods cannot compete with high-tech ships in the race for the last fishes. With their livelihoods at risk, many people see migration to Europe and US as the only solution.

But wait, I also have good news: well managed fish stocks can recover rapidly. If we don’t wait too long to act, as in the case of the Northern cod. For that we need appropriated policies in place and their enforcement.

“We need to fish less to fish more”, sums it up Clara Ulrich, chair of the EU’s scientific committee for fisheries, in the conference in Paris. In order to achieve its economic potential to the fullest, global marine fisheries should reduce significantly their fishing activities. That could generate additional gains of $ 83 billion worldwide, according to a World Bank study.

In 2014, fish consumption reached a new record: 20 kg per capita, twice as much as in the 60s, according to FAO. Of course, the consumption varies across countries. France, for example, is gourmand, with each habitant swallowing 35 kg of fish per year, while in Africa, the annual average is less than a third of that –  10 kg per person.

Overall, fish consumption is rising due to the growth in aquaculture – which now provides roughly half of the world’s fish production. Although aquaculture seems to be a way to relieve pressure on the oceans, it’s not always the case. In fact, raising carnivorous fishes, like salmon, harms even more marine environments and threatens food security.

Wild fishes are required to feed the farmed ones. Small species such as anchovies, mackerels and African sardines, basis of the alimentation in coastal developing countries like Senegal, are now becoming fish meals. A new study published in the scientific journal Fish and Fisheries estimates that about one quarter of captured fishes across the world’s oceans are used to feed animals, from salmon and shrimps to chickens and pigs. According to the study, 90% of these wild fishes are perfect fine to human’s consumption.

Farms of salmon and tropical shrimps also release chemicals into the sea and are a source of diseases to marine life. On the other hand, oysters, mussels and clams have been raised with low environmental impacts and, therefore, we can go for them with a clean conscience.

In order to eat sustainably, each one of us could eat up to 8,3 kg of wild fish per year (or once a week, considering a portion of 173 g), according to Didier Gascuel, president of the French Association of Fisheries. We don’t only need to eat less but also better.

“Consumers should care more about what they consume and ask some questions”, said Benjamin Enault, Associate Director for Utopies, a French consulting firm, in the event in Paris. Where does the fish come from? What is the fishing method? Industrial or artisanal? Is this a threatened specie?

These questions helps us to make better choices and use our purchasing power to support businesses whose practices we endorse. Artisanal fishermen and companies embracing sustainable practices, for example, should be recompensed for being socially and environmentally responsible.

Quite often businesses are opaque and information is not fully available, but the simple fact of questioning a restaurateur on fish’s origin, for example, or boycotting brands with unsustainable practices are ways to pressure the industry towards responsibility. Many brands already understood they create value by ensuring that their whole value chain is sustainable.

Ensuring that the fish we eat is sustainable may not be easy,  but there are some guides that can help orient our choices (below). Overall we should ease on threatened species or on the ones raised or caught through destructive methods. According to the French Association Bloom, some species to be avoided are: Atlantic cod, different species of tuna, haddock, swordfish, salmon, sharks and rays.

A QG article indicates replacements we can make in order to stop eating overexploited fishes, and offers some recipes. Instead of going for shrimps, which are farmed in bad conditions or caught through destructive methods, we should try mussels, for example. Eating small fishes such as anchovies, herring, sardines and mackerel is also fine.

Labels like the organic ones and the MSC can help to orient our choices as well, although the experts gathered in Paris agree that there is still room for improvement, specially concerning MSC. Other strategies to eat sustainably is eat locally whenever possible and diversify the diet, including being open to try less “famous” species.

Robert Calcagno, head of the Institut Océanographique, told that in the Prince Albert II of Monaco’s wedding, to the guests’ surprise, the main dish was not Bluefish tuna but mullet, a less noble fish. If a prince can give up on high-quality tuna even in his wedding and adopt more sustainable eating patterns, we also can. Tuna sushi? Think twice.

WWF seafood guides (for European and Asian countries),
Safina Center (for US),
Mr Good Fish (for France),
National Geographic (international, including information on  quantity of  Omega 3 and presence of heavy metals per specie)
Bloom (in French, comparing different guides)

2 thoughts on “Should we still eat fish?”